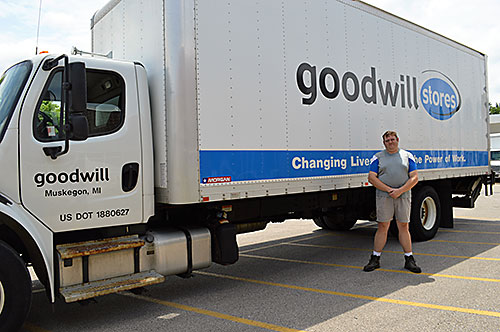 Jon was referred to Goodwill’s Work Adjustment program in 2002 from Michigan Rehabilitation Services (MRS) because of his inability to obtain full-time employment. Jon wanted to be a truck driver like his father had been and was placed in a truck driver helper position in Goodwill’s transportation department. In this role, Jon would accompany the truck drivers to Goodwill stores or pick-up locations, and help load and unload donated items. He learned work skills, but still struggled with some behavioral barriers.

Transportation Manager Mark Helsen supervised Jon and regularly met with his case manager to discuss Jon’s job performance. Jon’s challenges were his resistance to change, lack of patience, being socially withdrawn, and anxiety. In spite of these challenges, he performed his job well and still dreamed of being a truck driver. He asked Mark once a week when he would be given the chance to prove himself.

In September 2014, Jon was moved from client status into a staff positon as a part-time driver assistant. Jon continued to ask Mark when he could become a driver.

Mark began training Jon but quickly realized it was the other way around “He was training me,” Mark said. “He knew everything about the stores and pickups. He told me he was tired of what he was doing and that he really wanted to be a driver.”

Jon worked to obtain a chauffer’s license and medical card because he knew it was needed for the truck driver position. After several months Mark felt it was time for Jon to get his shot because “That’s what we do at Goodwill, right?”

After three weeks of training with no mistakes, Jon was promoted to a temporary driver position to help fill in and cover for another driver who was out on leave. Jon became a permanent part-time truck driver in May of 2017, and in January of 2018, Jon was promoted to full-time.

“Looking back now on Jon over the years and the barriers that held him back, they are no longer present,” Mark said. “Jon walks and acts like a happy confident person, he stays in the moment and does a great job daily. Jon is more social, he seems to welcome the chance to engage with other staff here at corporate and the stores.”

Jon has always worked very hard and has had a positive impact on the overall success of the transportation department. “We currently have six staff where we once had eight,” Helsen said. “We get more done than we ever have and a big part of that is because we can count on Jon to do his share and sometimes even more every day. I think as a manger I am supposed to provide inspiration but most days Jon gives me the inspiration.”

Jon talks about getting his own house some day and told Mark that because he gets good pay and benefits he believes that will happen. Jon very much deserves the success he has achieved!