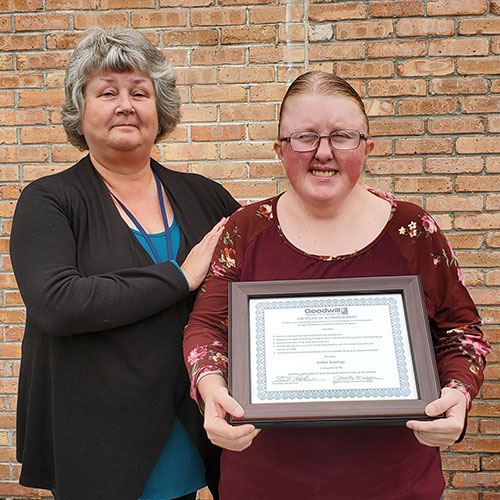 Prior to coming to Goodwill, Amber had some community work experience, but her employment always ended abruptly. It was the hope of her service coordinator at Michigan Rehabilitation Services (MRS) that she gain additional skills that would help her hold onto a job when she was referred to Goodwill’s Janitorial Occupational Training (JOT) program.

“When Amber came to us she was gregarious and quick to smile,” said Goodwill Janitorial Services Manager Kathy Harris. “She has a sarcastic sense of humor, and enjoyed laughing and joking.”

Amber is very self-sufficient. She is able to drive and often picks up her younger brother, helps her grandmother with shopping, and helps her mother at home.

When training began, Amber was clearly able to understand and hold onto the material presented to her but supervisors began to notice some attention-seeking behaviors. She also revealed a tendency to cry easily when anyone had to redirect her behavior or tasks had to be repeated for quality. Arguments with team members began, and Amber was often described as being “bossy” or oversensitive. In addition to having some issues on the job, Amber’s personal life was strained when her mother was diagnosed with cancer and began treatment.

Her Goodwill trainers worked through these momentary missteps, and Amber began to thrive in the program. She still required support in order to be successful, but she was cleaning very well and building a positive team energy with her co-workers. When an opening on the janitorial mobile crew began available, Goodwill offered Amber a position.

Once the newness of the position wore off, Amber’s behavioral problems reappeared and she began to struggle with her work assignments. Things became so tense her teammates didn’t want to work with her. Amber received a couple of corrective action write-ups, and things began to look bleak for the likelihood of her remaining employed.

In a final attempt to help Amber recognize and change her difficult behavior, Kathy sat down with Amber and they wrote a personal improvement plan together. Amber accepted the specific items identified for improvement and began to work on her behaviors. She also sought some outside counseling for herself to work on personal issues that were bothering her.

“What was really amazing and unusual was what happened next,” Kathy said. “It took about three weeks but we all noticed results … fewer arguments among the crew, less stress and daily upsets, and Amber’s job performance required less and less rework and redirection. Finally, I started to hear positive compliments from her supervisors and coworkers. That was a turning point. This was not a temporary change either. Amber was in a positive growth spurt! She began to ask about what she needed to do to improve further, and how she would be able to get a promotion.”

In June, Goodwill Janitorial Services secured a new contract with Hackley Public Library. In the beginning, staff were rotated on the assignment, but because Amber could drive and was looking for an opportunity to advance, she was awarded the job as an independent cleaner.

Amber learned every aspect of the assignment and takes pride in the quality of her work. She also learned how to track her mileage, lock up and secure the building, and be responsible with the keys. Now the lead on the project, Amber even services the library on Saturdays with a teammate. She is doing an exceptional job cleaning, as well as setting the alarms correctly, and also performing a myriad of security steps back at Goodwill headquarters after the assignment.

“Amber proved to herself and to us that she is able to handle the responsibility consistently,” Kathy said. “We are all very proud of her commitment, her growth, and her tenacity to step forward on her own behalf.”

Amber now cites working with others as her favorite part about her job. “Goodwill is a good place to work and to find balance with yourself,” she said. Her advice to others who face challenges on the job is to “be yourself and try your best.”