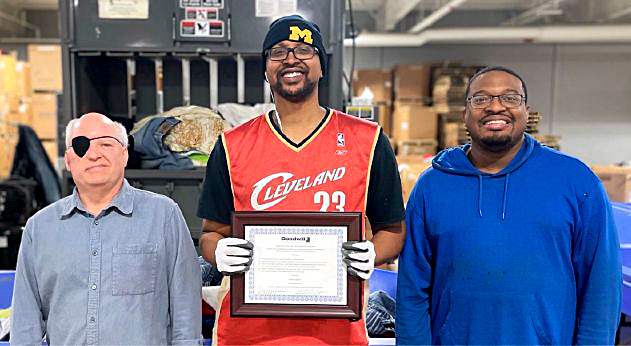 “It was hard at first because I didn’t understand the importance of communication with my boss (Pat Ferrier),” Jason said. “I was often late because of a training class I had to take, and wasn’t telling him. Pat sat me down and told me the importance of communicating. He told me that when I was not there and didn’t tell anyone, it negatively impacted the team. I really had to work on that team player stuff. That was hard.”

Thanks to Pat’s leadership and a mentor he found in coworker Kawan Payne, Jason quickly learned the importance of both communication and teamwork.

“Kawan was my baler partner,” Jason said. “One person couldn’t do the job. Kawan needed me and I needed him. We had to work together and we had to rely on each other. Kawan not only taught me how to tie bale properly, he also told me something that I will never forget.  He said, ‘Man, if you continue working hard, there will be opportunities for you.’ He was right. Doors have definitely opened and I have definitely continued to work hard.”

In 2019, Jason was promoted to full time. “Jason is an asset not only to our department, but to Goodwill as an employee and an ambassador,” said Goodwill Retail Production Manager Pat Ferrier. “Jason has taken direction and initiative to become a person than I can rely on for many different tasks. Jason always says that regardless of what is asked of him, he knows it is for the betterment of Goodwill. His attitude towards work and others is exceptional.  I expect Jason to continue to improve in all aspects and become a department leader within a couple years.”

Recently, Jason was appointed to be safety coordinator for his team.

“I love being a part of the safety team,” Jason said. “I love the meetings and the responsibility. Goodwill has helped me by supporting me at every step. Dina, Pat, Shelly, Jim … the team has helped me do bigger and better things. That’s what a family does, but I had to work hard to get here. I had to build trust with my boss and my team. There is a choice. Everybody in the world has a choice.  And if I had the choice now, I would do it all over again. The positive and the negative, because the experiences shaped me. I learned how to be a part of a team but I had to be willing. No one else but myself can make it work. If you’re not willing to put in the work, it will be hard for you. People can show you how to do it, but the choice to do it is yours.”

When asked if he thought he has been a mentor to others similar to how Kawan was an early mentor to him, he paused and then said, “I don’t really know … but I think probably yes.” Jason’s enormous smile didn’t require any additional words.

The Offender Success training program is a state-wide strategic approach to creating safer neighborhoods and better citizens through the delivery of a seamless plan of services, programming, support, and supervision for prisoners re-entering the community. Program participants are referred by the Michigan Department of Corrections Parole Board.