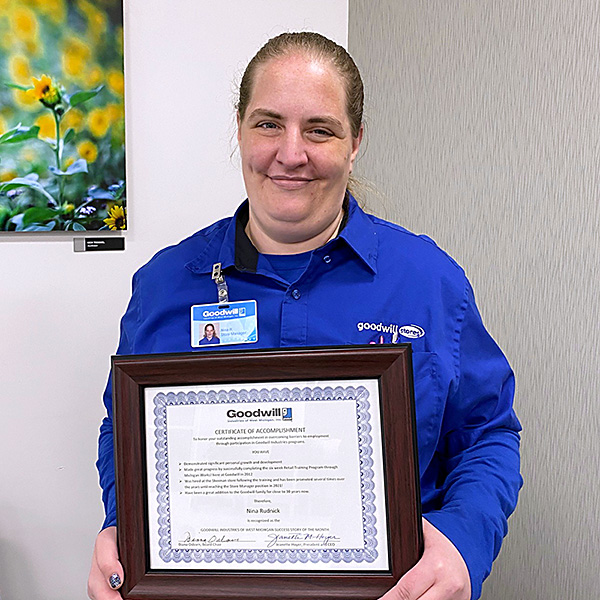 Since the age of 16, Nina had worked in the fast food industry and she was ready for something different. In 2009, after the birth of her second child, Nina enrolled in online college classes but found it challenging to juggle being a mother while attending classes and working. In 2012, Nina went to Michigan Works! seeking assistance in securing a job that would support her being a parent and allow her to grow in a career she liked. “My confidence level was low and I needed some help getting into another career,” Nina said.

Michigan Works! referred Nina to Goodwill’s Retail Training Program, a paid work experience at the Muskegon–Sherman store. The six-week program allowed her to learn the retail industry while earning a paycheck. In spring of 2012, Nina began her training under the mentorship of Store Manager Shelly Schmid. “There were four women in the program and we did most the tasks of a regular store associate. It was an excellent learning opportunity,” Nina said. “It allowed me to build my confidence and learn some new skills while getting paid.”

At the conclusion of the six-week program, Nina was offered a permanent position at the store. Two of the other trainees were also offered and transitioned into part-time employment.  “I wasn’t sure what happened to the fourth woman,” Nina said.  From there, both her self-confidence and her career took off.

In 2014, Nina transferred to Goodwill’s North Muskegon store where she was promoted to part-time team lead. In 2019, she was awarded the full-time team lead position. In 2020, she was promoted again to assistant manager. Earlier this year Nina applied for, and was granted, the position of store manager! “Since being in her new role, the store sales have been fantastic and employee engagement is outstanding,” said District Manager Marlene Prowant.

“I love working with the people and working in a job I like,” Nina said. “The hours allow me to be home, put my kids to bed, and put them on the bus.” Keeping her focus on her family is top priority for Nina, and this job supports that. “When I interview candidates for the store, I always tell them my story. I want them to understand that Goodwill can help them find balance and offer things that other employers can’t. It is wonderful for moms or single mothers and for people who need to build their confidence,” Nina said. “My life has changed for the better because of Goodwill and I take every opportunity I get to share my story and encourage others to make a better life for themselves.”

Nina said she felt supported at every step of her journey with Goodwill. “Shelly and Deanna (Store Manager N. Muskegon) were both great. I am so thankful for their encouragement and for believing in me.”

Nina shared that just last week the fourth trainee who completed the retail training program with her way back in 2012 applied at her store in North Muskegon. “I couldn’t wait to give her a job.” Nina said.  “It was so nice to see her again!”

Although the Goodwill Retail Training program in partnership with Michigan Works! is no longer offered, a retail training track is being added to Goodwill’s new GoodWorks program.