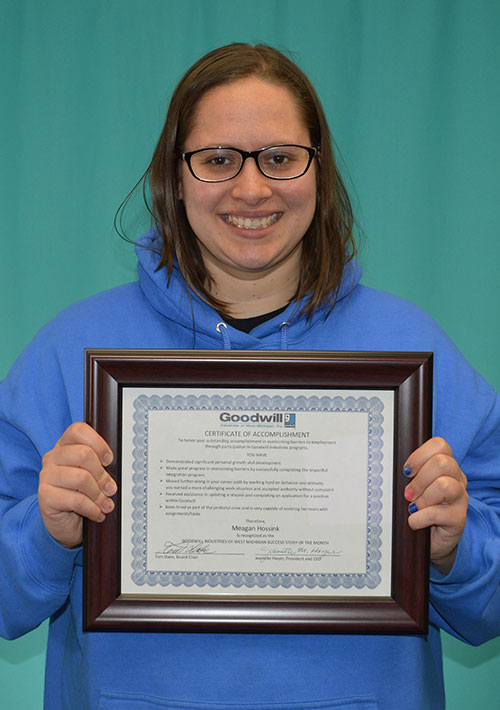 Meagan was hesitant to come to Goodwill. She had previously participated in employment programs from another human service organization without success.

This was devastating to an individual like Meagan who struggles with anxiety, attention deficit hyperactivity disorder (ADHD), and a mild intellectual disability. Luckily, Meagan and her mom decided to try Goodwill.

Goodwill case managers assessed Meagan’s goal to work in the janitorial field and enrolled her in Goodwill’s Impactful Integration program.

Meagan’s hyperactivity and inattention made it difficult for Meagan to learn the elements of her job and complete tasks, but Goodwill staff were patient. Meagan was placed on Goodwill’s janitorial training crew to help her develop her employment stills. Over time, she learned task adherence, on-the-job problem solving, and developed interpersonal skills.

In a short time, Meagan was able to master and complete assigned cleaning tasks, but still struggled with behavioral issues and attitude.

Meagan’s manager gave her the chance to work through her emotions and held her accountable to complete each task before moving on. As she improved, Goodwill Janitorial Manager Kathy Harris advanced Meagan to the next level of training.

“Because Meagan has been willing to work so hard on her attitude and behavior, we recognized that she was ready for a more challenging situation,” Harris said.

Meagan began joining the crew cleaning outside facilities such as the Ottawa County Community Mental Health building and Pioneer Resources in Holland. She has made progress in accepting authority without complaint.

Recently a regular position opened up on the Goodwill Janitorial Services crew.

Meagan’s employment goal as well as her continued efforts to work towards achieving interpersonal management skills made her an excellent candidate for employment.

Meagan received assistance in updating her résumé and filling out the application. She interviewed and was hired by Goodwill on March 5.

While Meagan has graduated from Goodwill programming, her support from the Goodwill staff continues. Meagan has earned the respect of her coworkers on the janitorial crew and has become an integral part of the team. She is very capable of assisting her team with completing janitorial tasks and assignments.